Home » Thriving Mutts – How It All Started!

Thriving Mutts – How It All Started!

This is the story of why I decided to become a Dog Listener. My mission is to empower YOU as a dog owner to provide the best life possible for your dog! And you’ll be happy too, isn’t that amazing!

Have you ever experienced feelings of stress, inadequacy or hopelessness, or simply feeling like a failure as a dog owner? Maybe your dog lashes out when you meet other dogs, or a car or bicycle passes by, or it constantly pulls on the lead and is all over the place on your walks.

Or perhaps it barks incessantly when there’s a noise outside or it’s time to put on the lead to go for a walk, or when the doorbell rings.

Or maybe it’s really picky with food, and you have tried everything and anything but nothing seems to be tasty enough? Or even worse, your dog guards its food and growls at you while standing over it.

Well, my friend, you’re by no means alone. You may think that everybody else knows what they’re doing and have everything under control, but the truth is so many of us feel that we lack one way or another when it comes to dealing with our dog. I have for sure. Let me tell you about it.

Five years ago we adopted our sweet, funny and beautiful Lola from a rescue center. Breed doesn’t really matter when it comes to dogs, and we’ll talk more about that in an upcoming video, but I fell head over heels in love with the knee-high, long-legged and slim Greyhound mix that jumped out of the truck.

She was only a year old at that time but had already experienced being abandoned and roaming the streets of a small town on her own. That’s tough on any dog, and for sensitive and young Lola it was traumatizing.

Of course, I knew nothing about how it had actually affected her when we took her home, and it took some time for it to pop up, but when it did, it was impossible to miss.

Eventually, I discovered that she was nothing less than utterly terrified of other dogs. Like really really panicking when she spotted one outside, or heard one from indoors for that matter. There was no trigger distance for it, just the mere glimpse of another dog sent her screaming and flailing like a mad whirling dervish on the lead.

When it was at its worst she got so frustrated and mentally blocked she nipped at my legs. I was never actually bitten, but it still hurt and caused the anxiety in me to rise whenever we went outside and I knew there could be other dogs around.

Well that’s usually every time, right! It quickly became a downward spiral, with Lola sensing my growing anxiety and becoming even more tensed and terrified.

I’m ashamed to say I tried some not-so-kind methods trying to solve the situation. They were all recommended by prominent dog trainers, mind you.

I was advised that whenever she started her panicky routine I should shake a metal tube by her ear that gave of a horrible sharp rattle. Just imagine how that must feel for a dog with its acute sense of hearing.

We were also told to pull her back with a sharp yank on the lead. Someone even said we should correct her with a slap on her back.

All of these abusive methods could momentarily distract her from the situation, but it was very clear they did not solve anything. On the contrary, they made matters worse because it was obvious she now had double fear. First of panicking when seeing another dog, and in that situation now also anticipating threats or violence from me.

I felt horrible and like I was letting her down all over again. It was a really really painful situation.

To be fair, I also read some advice about non-violent methods like distracting her with treats or play. But in those moments of panic and distress she could not be reached, she wasn’t able to react to that.

However, I had previously heard from a friend about Jan Fennel’s Dog Listening method. I really didn’t know that much about it, apart from the fact that it was completely free from any kind of force or abuse. Now that was like balm to my troubled heart!

So, feeling I had nothing to lose, I booked a consultation with a Dog Listener.

For two hours, we talked about what a dog is, how it perceives the human world, what various dog behaviors actually mean, and what our human behaviors tell the dog. I can tell you, my world as I knew it ceased to exist, at least when it came to understanding what it takes to live with dogs and how a dog experiences life among humans.

It was definitely worth every penny and every second. I was so relieved to realize that I could let go of all thoughts about not being enough for my dogs, or not being capable of dealing with our issues with Lola. There was another way, one that empowered me as Lola’s owner give her the best life possible.

Mind you, it wasn’t and still isn’t all peaches and roses from there on. Lola can still panic and get frightened out of her wits. Maybe that will never disappear completely, I truly don’t know, but it’s gotten so much better. She can actually spot a dog from a distance and decide to let it go.

The huge difference is, now I know what’s it all about and how I can best help her. And it has nothing to do with correcting or punishing, and there’s absolutely no force or violence involved. Only communicating with her the only way she can possibly understand.

There’s so much confusing advice in the world of dog training, and so many advocates of methods that involve intimidating, dominating, forcing or hurting the dog, either physically or phsycologically.

About a year ago I decided to train as a dog listener myself, so that I could help other dogs and their owners the way Lola and I have been helped.

My mission as a dog listener is to show you as a dog owner that there are alternatives that take into consideration the true nature of a dog, and how you can communicate with it and create a stress-free and happy life.

It’s not a quick fix, it’s not a one-time and you’re done thing, but once you’ve tried it and experienced it you don’t ever want to go back. I promise.

I’m so excited to share this journey with you and empower YOU to provide that happy stress-free life every dog deserves! And just to make things clear, this is not dog training as such, this is about understanding your dog and how to communicate with it, and relieving it from stress and responsibility for the pack. That is key.

But, you can still do all that fun dog training stuff, like nose work, tricks, competing in agility or whatever it is you and your dog enjoy!

Thriving Mutts. For the life your dog – and YOU! – will love! 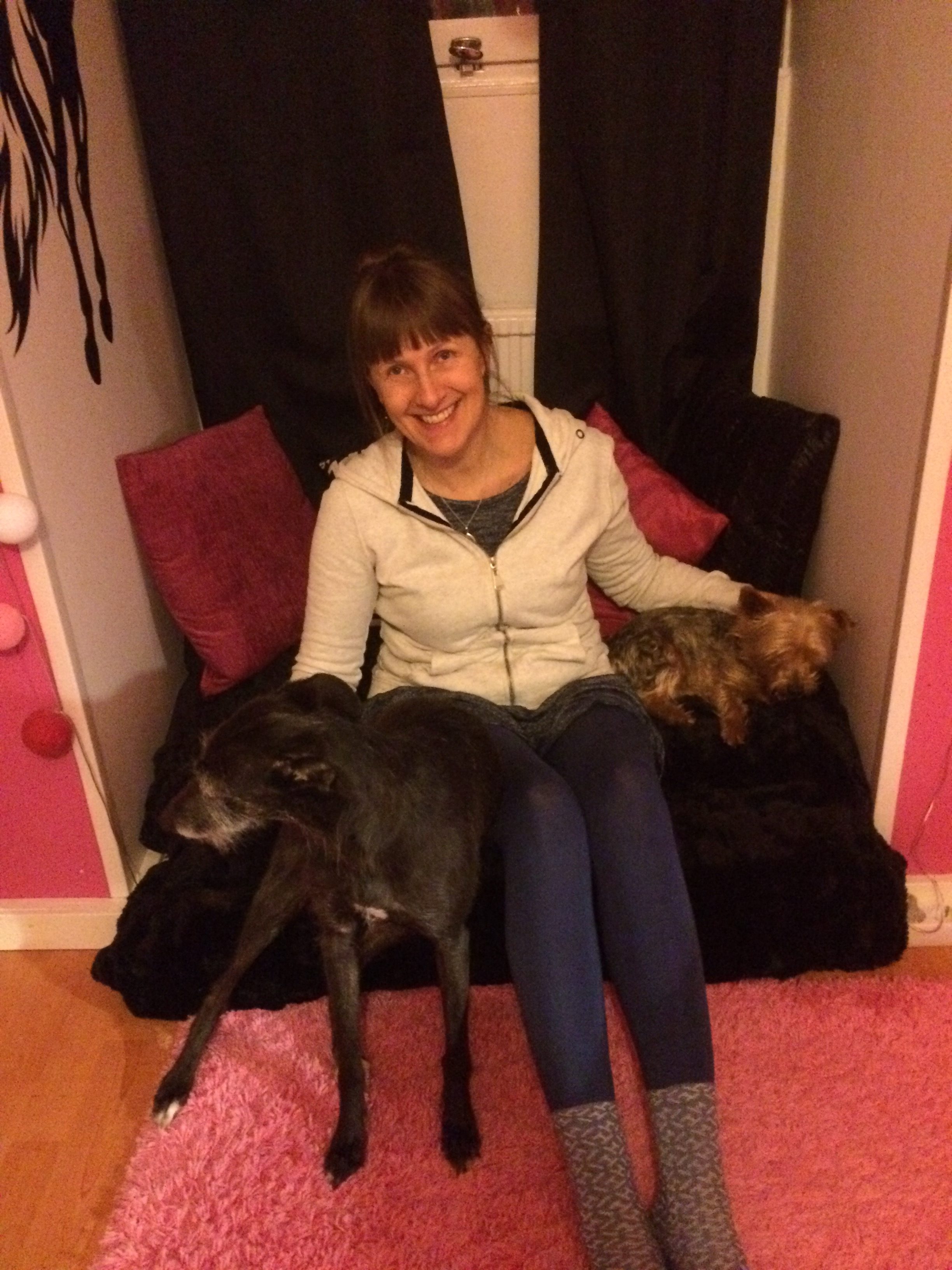 Katrin is a Certified Dog Listener trained by Jan Fennel. She has lived with dogs since she was a child, dogs of all sizes and temperaments. Katrin also holds Master's degrees in Biology and Educational Science. This has given her a deeper understanding of dogs as a species. Having worked with students of all ages teaching sciences, her mission now is to use her teaching experience to empower dog owners all over the globe to live happy and stress-free lives with their dogs!
All Posts »
PrevPreviousSelf-Isolation Because Of Corona-Virus – A Dream Life For Your Dog!
NextDog Listening – Now What IS That?Next

SAVE & ACCEPT
Scroll to Top